I agree that the sound of china clinking together brings cheerful thoughts.  There’s just something about the anticipation of a cuppa that makes me glad.  It definitely lifts one’s mood, which might be necessary this time of year.  Do you get the blues when the sun doesn’t show its face for a few days?

Well, do come in, leave the rest of the world behind, and dispel any melancholy by sharing conversation and teatime.   I’ve chosen the light classical guitars of the Romeros for background music and a strong Earl Grey to bolster our spirits.

By the way, did you know that a 2014 study at the University of Calabria in Italy showed that the bergamot extract in Earl Grey is good for your heart?  They discovered it lowers overall cholesterol while increasing HDL, or good cholesterol.

Let’s have at least two cups!

People have enjoyed tea for centuries, but I believe the term teatime was first coined in 1727.  The drink’s history began over 4,000 years prior in China.  Rumor has it, a servant was boiling water for his emperor when some loose leaves blew in and Voila!  By 618 AD, it had become China’s beverage of choice.  Buddhist monks carried the elixir to Japan, and by the late 16th century, it made its way to Europe, via the Portuguese and Dutch.  Catherine of Braganza, the Portuguese wife of Charles II, established the brew as a favorite in Great Britain… she was rumored to be a tea addict!  By the 20th century, consumption in England had grown to 6 lbs per person, per annum.  Considering the leaves’ light weight, that’s a lot of tea. 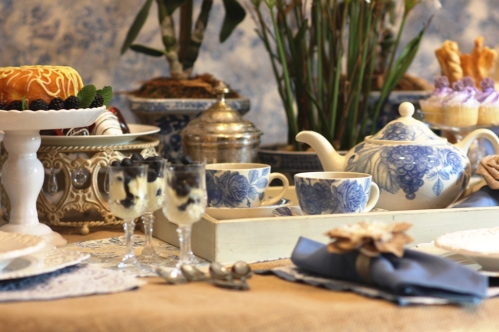 I don’t care to know how many pounds I consume annually.  I’m just pleased to learn that it might be good for my health.  I can’t say the same for the sweets I’ve prepared today, although I’m hopeful about the sandwiches (watercress is a green leafy vegetable, after all, rich in minerals and antioxidants)!

The ubiquitous crust-free sandwich makes its appearance today.  I felt I had to include them, and I’ll admit, I slaved over these small bites.  A nearby market carries watercress, so I combined the chopped leafy vegetable with cream cheese to produce these perennial favorites.  I’ve also layered maple ham, watercress, and cream cheese with a dash of Tabasco for an alternative.  I went so far as to make a layered version with pesto, pineapple cream cheese, ham, and cranberry jelly (the verdict from my son: There’s a lot of flavor here!).  Don’t be afraid to experiment, just have a sharp knife for removing those crusts.  I find cheese twists always make a fine companion to a cup of tea. 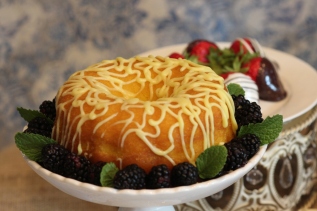 Elevate a store bought cake with the addition of fresh berries and mint.  I’m proud of theses mini cupcakes, jazzed up with sparkling purple sugar and a lavender infused violet hard candy from France.  Aren’t they pretty?  Check out these lacy place settings. 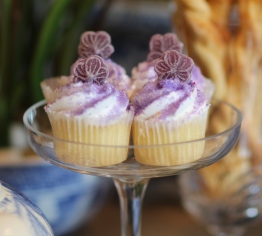 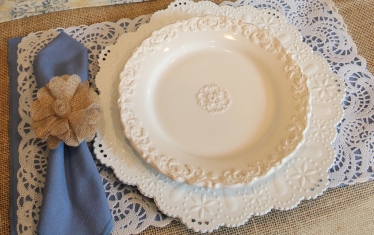 A real treat in winter, a variety of berries grace the table.   In addition to the blackberries, blueberries with custard fill tiny crystal goblets, while chocolate dipped strawberries provide a bit of glamour.

After filling the cups, keep a fresh pot on a nearby tray for refills.  If your friends have settled in and gotten comfy (& hopefully they have), you can replenish their drinks from the tray.

Add to your ambiance by utilizing throw pillows that match your theme or color scheme.  I’ve noticed many at reasonable prices available online, in catalogues, or at discount shops.  Your visitors will feel extra special because of this little touch.  If guests choose sugar to sweeten their tea, they’ll be greeted by my troll spoon! 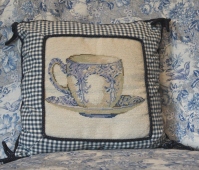 Thank you for coming. I hope you feel pampered and appreciated with this blue and white spread aimed to chase away the doldrums! I look forward to our next visit. 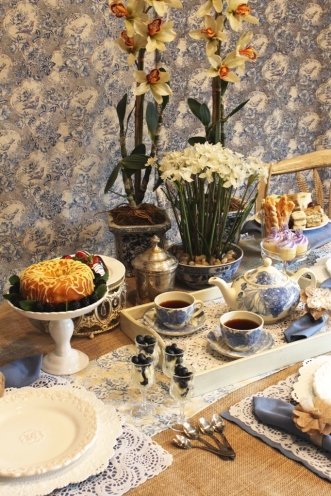 Receive updates and exclusive perks available only to my subscribers! 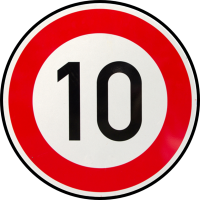 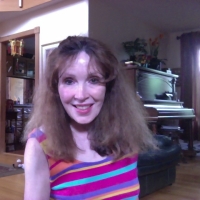 "If we want to explore deeper oceans, we first have to leave sight of the shore.”

A blog full of humorous and poignant observations.

My Cup of English Tea

Setting up a Brand-New Life in London

Scotland with the Wee White Dug

A Scottish travel blog showcasing the best of Scotland

Graphic Design with a Vintage Flair

Writing, the fire within my bones...

10 Tips on India, Travel and Lifestyle

Be a Leader in Your Own Life

Pictures of Tina, her home and all the places we visit